During the monitoring of the Moon surface in the evening of April 30 2009, Marco Iten and me detected an unusual flash. We first suspected it was a meteoroid impact. Post analysis of the avi-files (the frames on both files show simultaneous time because of our KIWI-OSDs) concluded that the flash was most probably happened on the atmosphere of the Earth, because in the two movies the flash was not placed on the same Moon position. We checked the frames further. A second flash of light, stronger that the precedent, was detected outside the Moon disk some 23 s after the first. This one behaved as a typical meteor, lasted one second, and left a very small trail, probably because of a nearly head-on hit. The meteor`s direction seemed to come from the location of the first flash. An unusual behaviour, indeed. Also in this second case, the flash of light was not detected in the same sky position from the two locations. Our two observatories are located about 13 km apart and the tiny displacement of the two flashes was surely caused by the small parallax angle.
But it’s not finished. What was more unusual is that a third faint flash of light, about 27 s after the second, was detected simultaneously on the two movies. All the three flashes were placed on a straight line. And the angular distance of the three flashes was almost exactly proportional to their time interval.

What was secondly suspected a meteor, was now a very unusual phenomenon. Three meteors hitting our atmosphere almost head-on with the same direction? Suspicious. We analysed further our frames and calculated the parallax of about 1.0arcmin for the three flashes. The distance of the object was estimated between 30’000 and 40’000km. Surely a geostationary satellite.
Arnold Barmettler, from Calsky idenfied it as the military US satellite USA 142 / (DSP 19) launched on 09. Apr. 1999, IMEWS-19. Dimensions: 4 m x 2 m, USSPACECOM N: 25669, International: 1999-017A.
At the time of the observation it was at an altitude of 28’900 km.

In summary: what was firstly identified as a possible impact on the moon disk, was secondly looked out as a typical head-on meteor on our atmosphere and finally recognised as a US military satellite. 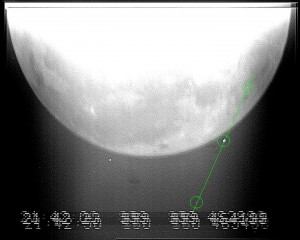 The stellar field of view of the event in Iten’s detection (© Iten). 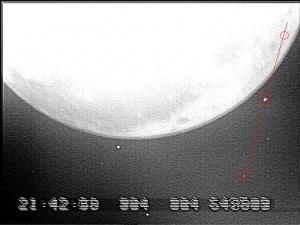 The stellar field of view in Sposetti’s detection.