I imaged artificial satellites during 1997-2001. I collabored with Bruno Tilgner a french satellite enthousiast. The asteroid (21650) Tilgner I discovered from Gnosca is devoted to him.

The 10 Jan 1998 I imaged the seven ASTRA geostationary satellites with my C8 telescope. The image was published in the May 1998 issue of the magazine Sky and Telescope. 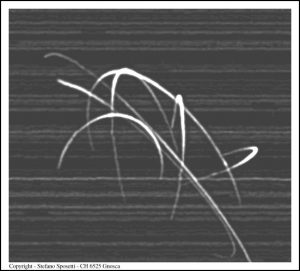 The animation of their movement is here.

In 1998, from 3 to 21 Feb, a prolonged number of clear nights allowed me to capture the movement of the ASTRA satellites.

Bruno Tilgner and me wrote an article in Sterne und Weltraum magazine (6/98) reporting our observations on these interesting objects.

The 8 Apr 2000 from Gnosca I captured the image of the satellite XMM-Newton. 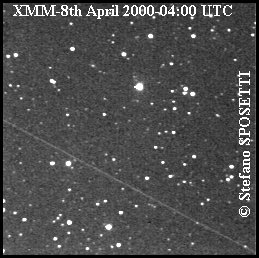 It was the first sighting from an european observatory.

The 26 Feb 2001 I tried to capture all the geostationary satellites above the sky of Gnosca. The image was done with the Baker-Schmidt camera.

The Gravity Probe B satellite is doing a fascinating and deep interesting physics experiment on the general relativity theory of Einstein. The satellite, launched the 20 Apr 2004, transits periodically above the Gnosca’s sky. 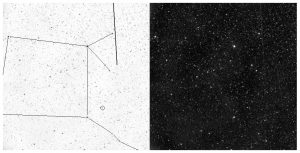 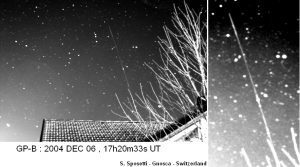 In the July 2005 issue of Sky and Telescope magazine was published the picture of GP-B taken by me.

I imaged the Rosetta probe of ESA during his approach to the Earth the 2 Mar 2005. 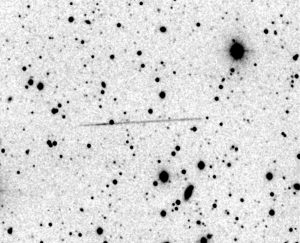 This movie shows the flyby.

The Giove-A satellite was captured in the evening of january 8th 2006 from the observatory. Giove-A is part of the Galileo’s project, the Europe’s global  navigation satellite system. Giove-A was launched the december 26th 2005. In the bottom 10s-CCD picture Giove-A shows its very faint trail (up-right in the image). It was very faint. I think fainter than 13 mag. The sky conditions were not ideal because of some thin clouds and the moonlight. The mid-time of the image is 17 h 09 m 51 s UT
The sky coordinates of the midpoint of the trace are:
RA: 22 h 50 m 53 s
decl: +24 d 29 m 42 s
Giove-A was heading in the SE direction. North=up ; East =left 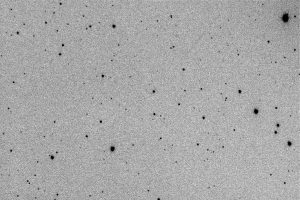 The WMAP satellite lies in the Lagrangian point L2 of the Sun-Earth system, just the opposite direction of the Sun.
At a distance of about 1.5 milion of kilometers (about 4 times the Earth-Moon distance)
this very important satellite made very precise measurements of the universe background
radiation.
This image shows five positions of the satellite seen from Earth on a time interval of 2.2 hthe 26 October 2006. The direction of the movement was from the bottom to the upper part of the image. Five frames of each about 800 s were added to show the non-linear motion of the satellite.
The brightness of the satellite was about 18 mag and its movement was a bit less than 2 arcsec/min. North=up ; East =left. 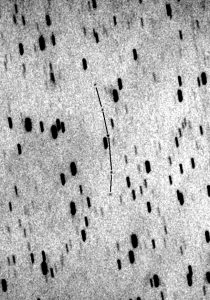 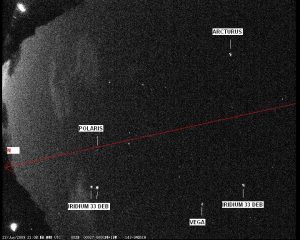 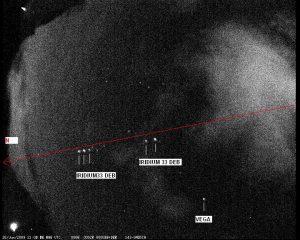